This is the letter I sent on January 5, my 50th birthday.

My dad passed away peacefully at home this afternoon just before 1 p.m. Mom and I were with him, and we had a very special experience. This morning I had received some special "Happy 50th Birthday" notes on a Facebook post, and I shared those with him and told him there were so many people thinking about him and sending love. I told him we would miss him but that we would be ok and that we would take good care of each other. I told him his grandson Calvin was thinking hard about him and that he should go pay Calvin a visit. Indeed, Calvin knew his grandfather had passed before he was informed.

My brother, Rich, and Dad had devised a plan that after he died Dad would visit as a red Cardinal at the feeder outside my parents' bedroom window. As he labored to breathe this afternoon, I spotted a cardinal at the feeder that was spending quite a long time at its meal. I said, "Daddy, it's ok to go. Fly now." 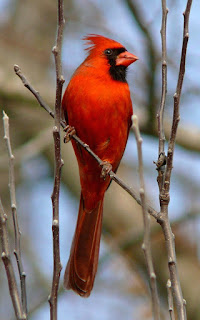 He took one more sweet, peaceful breath. Mom leaned her heart next to his, and felt his final  heart beats before they stopped. After a long quiet pause, I hugged my mom and said, "He did it. He did it perfectly."

His last days were sweet and just as he had written them. Yesterday, he and mom napped together in a nearly silent house. He was not in pain, nor agitated. He had needed very little medication to remain comfortable and was therefore able to listen and understand who was with him. His Godson, Brandon, called last evening on FaceTime and performed several lovely songs that he accompanied with his ukulele. "Today" was a longtime favorite of my parents' and I could almost hear Dad humming along inside his head. Brandon ended with a silly tune about a "song I wrote on the toilet." Ending with a joke was Jerome's style!

At bedtime, Judiet leaned in to kiss her Jeromeo good-night, and said what she always says, "Good night, my darling." 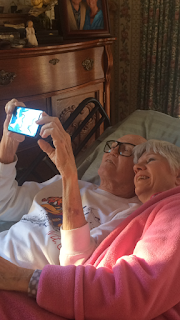 Although speaking had become difficult and he had said very little on that day, he whispered his answer, which is the answer he has always given. And they were the last words he spoke.