Writing with my Dad

Exactly a week after my dad passed away, I find myself back home in Washington and looking for a way to preserve memories of the nearly two months I spent witnessing the end of his amazing life. I wrote a series of letters to friends and family to share our experiences via email and Facebook. We took a lot of pictures. Although using imperfect technology for this project (my father has to be chuckling at my efforts to use an android application on an iPad!), I'm posting the writings that I created during this special time and a few of the photographs that illustrated some favorite moments. My dad read many of these posts before he died. He was always my best editor and the most exuberant supporter of my writing. I thank him now for encouraging me always to write and for creating this blog for me.

About a week before Christmas, on a gray, quiet day, my dad pulled out a thick file of papers and said, "Daughter, I have a request for you this morning. I want you to write my obituary." He sat in his comfy chair by the window, and I sat across the room at a little table and typed. Now and then I would ask for clarification or remark with something like, "Wow! You did that?" Looking through his long list of achievements and awards, my memory slipped back to a very special evening in Portland, Oregon, in 2001, when he was to receive an award but couldn't be there for the banquet. I went in his place and walked to the podium to accept the placard. I was so proud to be a Jerri Niebaum! That award was from the Special Interest Group for University and College Computing Services (SIGUCCS).

I typed my dad's obituary on my iPad, just as I'm typing this to post on my blog now. My mind whirls back to school days, typing on a Commodore 64 to create term papers. My dad was always patient when I couldn't remember the convoluted commands that drove that early word processor, and he nearly always proofread my papers for me. Inevitably he found a typo or a syntax error that needed correcting, but he always found something to compliment too. "Nicely done, daughter," is a phrase I will always treasure. So I share our final writing collaboration, his obituary, and I couldn't be prouder to be my father's daughter and to wear his name in my own version, Jerri Niebaum Clark. 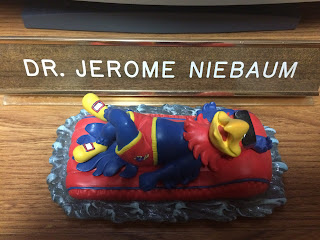 Eldon Jerome (Jerry) Niebaum died January 5, 2016, at home, where he had lived with Judy, his high-school sweetheart and wife of 54 years, since 1981.

Jerry, 76, retired from the University of Kansas in 2004 as Assistant Vice Provost for Information Services. His 23-year KU career spanned a time of enormous technological changes, and Jerry worked enthusiastically to keep the university community, the state of Kansas and the entire Midwest up-to-date. In 2002, the Kansas Department of Education awarded him its Kansas Leadership in Technology Award to recognize his work to bring Kansas online through KAN-ED, a statewide networking project he led for the Kansas Board of Regents. He had previously directed several projects funded by the National Science Foundation to connect schools and libraries throughout Kansas and the Midwest with electronic information resources. In 1993, he was principal investigator for an NSF grant that created the Kansas Research and Education Network (KanREN), and in 1997 he led the effort to win an NSF grant that created the Great Plains Network Consortium to support collaborative research and high speed data sharing among member universities in the Dakotas, Nebraska, Kansas, Oklahoma, Missouri and Arkansas. He served as executive director of the Great Plains Network in 2003-2004. Nationally, he's been recognized by EDUCAUSE, which honored him with its Excellence in Leadership in the Profession award in 2000, and the Special Interest Group for University and College Computing Services (SIGUCCS), which inducted him into its Hall of Fame at a conference in Portland, Oregon, in 2001. He led seminars and workshops for national conferences of EDUCOM, CAUSE, Association for Computing Machinery, SIGUCCS and others.

Jerry's interest in computing began during his undergraduate days working on KU's first computer, an IBM 650, in the late 1950s. Completing his education degree in 1961, he went on to earn a master's in mathematics at Northwestern University and a PhD in computer science at Iowa State University, where he worked from 1968 to 1981. Throughout his career, he's provided inspiration and encouragement to employees at all levels; during his illness, his email inbox was flooded with notes from colleagues thanking him for helping to launch and support their careers. After retiring, he led a weekly computer study group through KU's Endacott Society to help other retirees stay abreast of current technologies. He took great pleasure in showing elderly friends how to use Facebook, Go-Pro cameras and drones.

Born in Caldwell, Kansas, on September 11, 1939, Jerome (Romie, as his youngest friends called him) was interested in technology as soon as he saw glimmers of it from his decidedly low-tech hometown. At age 12, he drove a tractor all summer to save $250 to purchase a black-and-white 17-inch Admiral television--and a huge antenna--that was a first for Corbin, Kansas. Discovering only one fuzzy channel within range didn't discourage his enthusiasm, and he happily took the entire set apart and put it back together "to see how it worked." His parents, Herman and Grace Niebaum, both had ended their educations at young ages. His father, a mechanic, encouraged his son from a young age to focus on getting a good education. In his self-published memoir Jerry wrote, "He told me more than once, only half in jest, 'If you ever pick up a wrench I'll hit you with it!'"

Music has played throughout Jerry's life, and he and Judy sang for many years in the choir at the First United Methodist Church. Together, they performed in the Ballad of Black Jack at the Lawrence Arts Center and sang in mixed choral ensembles at Kansas City Music Hall and at Carnegie Hall. He served on the board of directors for the Lawrence Community Theatre, serving as president in 1989-90. In addition, he's served on the boards for Friends of the Lied, KU Friends of the Theatre, the Douglas County Historical Society and the Lawrence Sesquicentennial Commission. A longtime struggle with an autoimmune disorder led him to become active in the Vasculitis Foundation, serving as the Kansas City chapter leader for 10 years.

Jerry died of cancer after several weeks in hospice care at home. He is survived by his wife, Judy; his sister, Joann Nulik; his son, Richard, of Chicago, and daughter-in-law Laurie Weber; his daughter, Jerri Clark, of Vancouver, Wash., and son-in-law Matthew Clark; and grandchildren, Michelle Kuykendall, Calvin Clark, Avi Zephyra and Astrid Ariana.

Jerry will long be remembered for his loyalty and commitment to friends and causes, his energetic and positive outlook and his wry wit. He wrote poetry from his bedside and provided friends and family with email updates about his health. In one note, he couldn't resist a final line of light-hearted humor. "Thanks for all your get well wishes. Try to do better next time."